OPSBA September 2016 Board of Directors Meeting 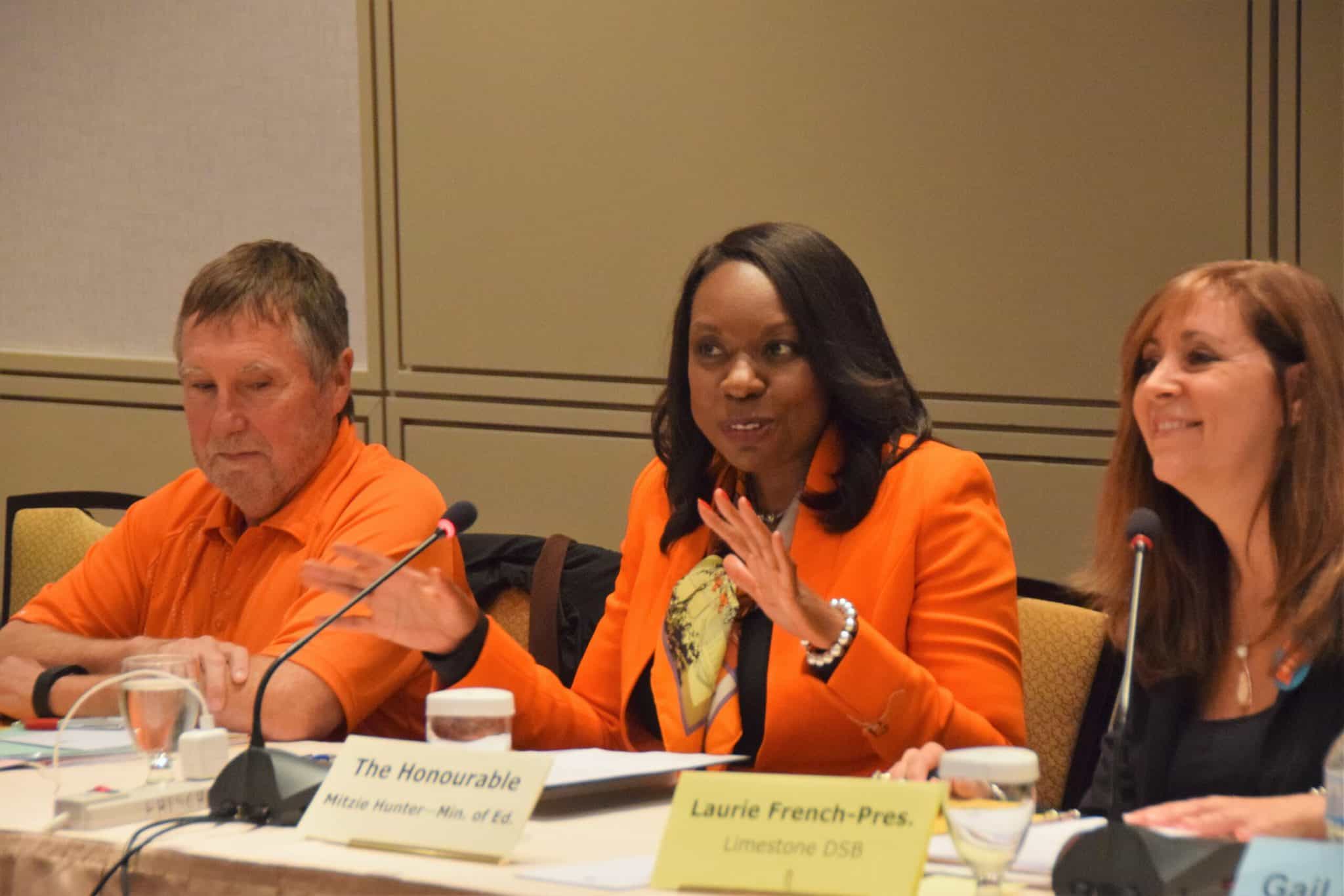 The OPSBA Board of Directors held a meeting on September 30 and October 1, 2016. Education policy issues that were discussed at the meeting are summarized below.

Traditional Territory Acknowledgement
First Nations Director Peter Garrow acknowledged that the meeting was situated upon the traditional lands of the Wendat, Anishinabek, the Haudenosaunee (Iroquois) Confederacy, the Mississaugas of the New Credit and the Métis Nation.

Minister of Education
Minister Mitzie Hunter attended the Board of Directors meeting on September 30, and participated in a wide-ranging discussion on issues relevant to the education sector, including commitments in response to recommendations of the Truth and Reconciliation Commission Final Report, closing achievement gaps, investments in child care and before-and-after care for students aged six to 12, the Renewed Math Strategy for Ontario, the government’s Well-Being Strategy, labour relations, community hubs in schools, raising the profile of school trustees and local governance, the Highly Skilled Workforce Panel Report, the Revised Health and Physical Education Curriculum and student transportation.

The Director of Finance discussed progress related to the implementation of the new Employee Life and Health Trusts.

Presentation from the Ontario Association of Children’s Aid Societies (OACAS)
Representatives from the OACAS joined the board to give an overview of the Association’s work and perspective on children in care. They noted there is a Ministry of Children and Youth Services mandate to improve cooperation between school boards and Children’s Aid Societies. It was noted that boards and CAS’s have a number of common goals and a need to work together for the success of all students, specifically children in care. They also noted the importance of Education Data Sharing agreements with the Ministry of Education that track the success of students in care and that October is Child Abuse Prevention Month and October 19 is Go Purple for Prevention Day.

Communications and Media Relations
The Director of Communications presented the premiere viewing of a recently produced OPSBA/Ontario Student Trustees’ Association video on the topic of accessibility in schools. The video will be available to the public later this Fall.

The OPSBA Board of Directors endorsed the guiding principles for the development of a flexible provincial framework to establish executive compensation for Directors of Education and Supervisory Officers.

Early Years Update
The Director of Policy gave an overview of recent announcements, including the posting of MPP Indira Naidoo-Harris as the new Associate Minister of Education for Early Years and Child Care. Discussion took place regarding funding to support the building of 35 new licensed childcare rooms across the province and the ban on child care wait list fees, and also a recent consultation with the Ministry’s Early Years Division to discuss the next steps in the Child Care and Early Years Act.

Legislative Update
The Director of Policy provided an update on recent developments at the Ontario Legislature, including the proroguing of the previous session, the eventual reintroduction of all previous government bills that had not yet received Royal Assent and an overview of the new Throne Speech, which included three items with an education focus: child care spaces, a new Ontario Student Grants program (reforms to OSAP) and recommendations of the Highly Skilled Workforce Expert Panel. She noted current and upcoming legislation relevant to the education sector and mentioned a resource package OPSBA staff have created for Local Government Week (October 16-22). She also reported on statistics and reports released from the Ontario Ombudsman’s Office and developments in Quebec and at the federal level related to the education sector.

AODA Update
The Communications and Policy Officer gave an update on the Accessibility for Ontarians with Disabilities Act, noting recent additions to the Integrated Accessibility Standards Regulation that include items related to service animals, support workers, mandatory organizational accessibility policies and staff and employee training.

Indigenous Trustees Council Update
First Nations Director Peter Garrow provided an update from the Council’s recent meeting with Minister Mitzie Hunter and Assistant Deputy Minister Janine Griffore, including the announcement of an upcoming indigenous languages symposium and the development of curricular materials regarding indigenous history, culture and perspectives. He also thanked the OPSBA Board of Directors for approving the new multi-year OPSBA priority “Advancing Reconciliation: First Nations, Métis and Inuit Education” as part of the organization’s key work for the 2016-17 school year. The Council is also working with OPSBA staff to include indigenous content in the upcoming Public Education Symposium.

EQAO Assessment Overview
The Director of Program Policy gave an overview of the recent release of provincial results of the 2015-16 Grade 3, 6 and 9 Assessment of Mathematics and the OSSLT. She also noted key items from the Ministry of Education’s new Mathematics Strategy, including PPM 160, which designates that no less than an average of 40 minutes of mandatory math instruction will occur each day in schools.

Ontario Coalition on Child and Youth Mental Health
The Director of Program Policy provided highlights from the recent Coalition meeting, noting the new co-Chairs Dr. Patrick Carney and Michelle Hurtubise. The meeting’s focus was on the government’s Well-Being Strategy, with a series of upcoming meetings arranged with new Ministers.

OPSBA Priorities 2016-2017
The Executive Director reported on OPSBA’s multi-year planning process, noting changes and additions to priorities, areas of emphasis, strategic considerations and key actions, which reflected direction given at the AGM and Board of Directors. An overview of the Executive Council planning meeting and planned actions to move OPSBA’s priorities forward was also provided. The OPSBA multi-year priorities action plan will be published in the 2016-17 Key Work document this fall.

Minister’s Advisory Council on Special Education (MACSE)
MACSE Member and OPSBA Board of Director Cheryl Lovell noted that the Minister of Education will be attending the next MACSE meeting in October. Updated training materials have been provided for Special Education Advisory Committees.