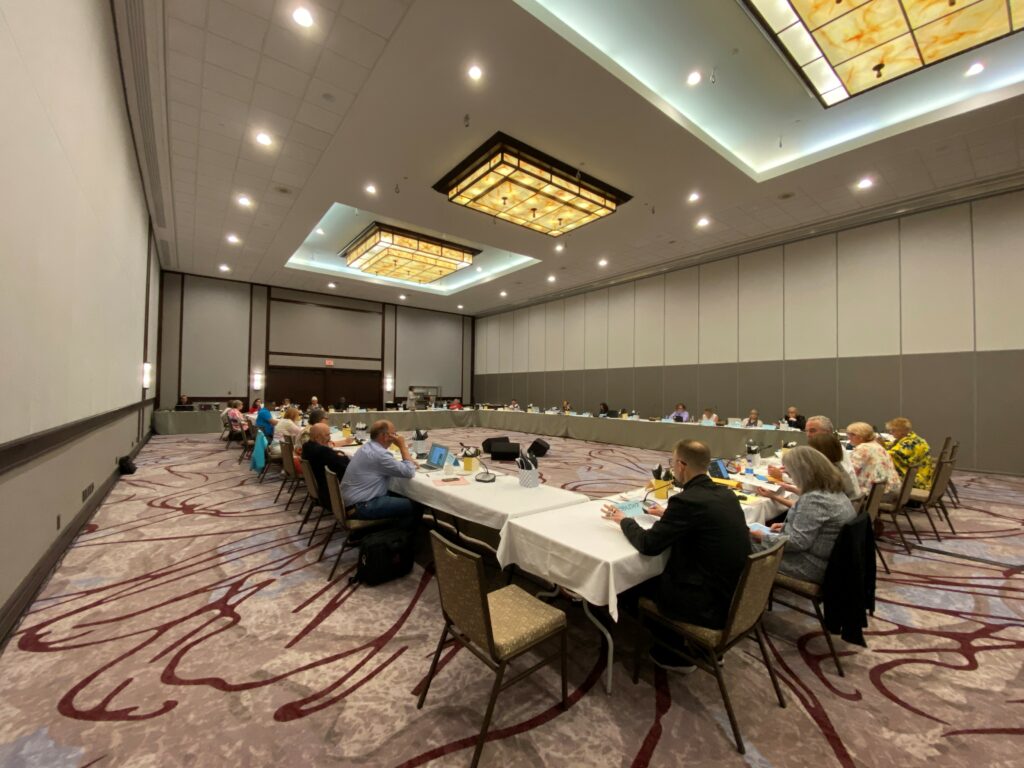 The Ontario Public School Boards’ Association (OPSBA) Board of Directors held a meeting at the Westin Hotel in Ottawa on June 9 prior to the OPSBA Annual General Meeting on June 10. President Cathy Abraham provided a traditional territory acknowledgement and noted that members were joining from traditional lands across Ontario.

Education policy and program issues that were discussed in public session at the meeting are summarized below.

The Legislative Assembly of Ontario rose after the 2022 Budget was presented in the Ontario Legislature. The election writ was issued on May 4 and the Provincial Election occurred on June 2. The fall session is to begin on Monday, September 12, 2022.

In the coming days and weeks, OPSBA will be contacting the new government to establish meetings to share and discuss education priorities. The time to form a new government varies and is typically two to five weeks. The current parliamentary calendar indicates the Legislative Assembly of Ontario will resume on Monday, September 12, 2022. OPSBA will continue to provide information and updates to members.

There were several trustee candidates in the provincial election and OPSBA congratulates those who were successful and will now become MPPs. We thank them for their contribution to public education. This includes:

Each year, the Ontario Public School Boards’ Association honours individuals who have made significant contributions in the field of education. While it is impossible to honour all those special people who make a difference, the recipients of these awards represent the many who contribute to the creativity and hard work that make our schools and education system leaders in the world.

Jack A. MacDonald Award of Merit and Certificate of Recognition

The winners of these student awards are selected on the basis of a sound academic record throughout their career, accompanied by outstanding community service and leadership. This year’s Jack A. MacDonald Award of Merit was presented to Alexandra Elmslie, John F. Ross Collegiate, Upper Grand DSB.

This award recognizes trustees who have given 25 or more years of service to public education. This year’s recipients are:

This award is given to an active or retired public school trustee for outstanding service. This year’s recipient is Judith Brown, Limestone DSB.

The Fred L. Bartlett Memorial Award is given to an active or retired member of the teaching profession for outstanding contribution to education in Ontario. This year’s recipients are Kimiko Shibata, Waterloo Region DSB, and Martha Rogers, Upper Grand DSB.

The OPSBA Award of Excellence and the Achievement Award are presented by the local board to volunteers for outstanding, exemplary and/or unique contributions to the overall well-being of the school or community through in-school, board-wide, extra-curricular and/or volunteer activity.

This year’s Award of Excellence was presented to Erin Kahkonen, President, Gorham and Ware Home and School Association, Lakehead DSB.

The Achievement Award was presented to the following individuals:

Updates were provided in private session on recent developments related to labour relations.

Following the final report of Turner Consulting to the Board in September of 2021, the 29 recommendations contained in the Equity, Diversity, and Inclusion Audit have been either actioned or are under consideration for potential implementation by the OPSBA Executive Council, Program and Policy Work Teams, the Indigenous Trustees’ Council, Project Compass (steering and sub-committees), as well as staff.

The 2022 CSBA Congress will be in person in Saskatoon this July, with an online attendance option available for trustees who do not wish to travel. Registration is now open! OPSBA thanks outgoing CSBA President Laurie French, a past OPSBA President, for her four years of contributions to public education at the national level.

For more information on any of the above reports, please contact OPSBA at inquiry@opsba.org or your school board’s OPSBA Board of Director member.